How To Find Your Money Balance 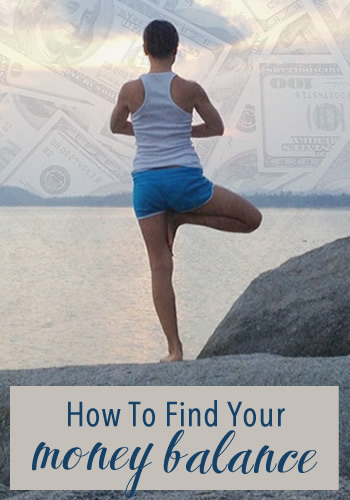 My friend, Laurie, recently shared how she was giving money all the power in their relationship and the steps she was taking to regain control. This happens frequently. Whether we like it or not, money does wield a lot of power in our world. It’s why it’s always been so important to me to teach Lauren and Taylor how to use that power wisely, so they are in control, rather than their money controlling them.

Restore Your Money Balance in 5 Steps

People in debt tend to struggle with this the hardest, in part because they are also dealing with the stress (and potentially feelings of guilt and regret) of eliminating their debt. There is no pill or potion that magically erases debt, but a balanced money mindset can help you stay on track and focused on your goal.

Step #1: Stop Comparing Yourself to Everyone Else

We talk a lot about the dangers of playing “keep up” and how it creates bad habits and all too often debt. What we don’t talk about is how we also compare our debt journey to everyone else and how that can be as equally harmful. I see people act ashamed or defeated because they feel their own journey to financial freedom is going much slower than others. They apologize for what they think is poor progress, instead of recognizing how far they have come and the positive changes they have made. Sometimes they give up because they think they have failed.

Figure Out What Works for You

First, stop comparing your debt payoff to everyone else. Even if you have the same amount of debt, it is still an apples to oranges comparison. For some, they may about to fall off their own fiscal cliff while for another, the situation may be less dire. Additionally, what we consider an aggressive debt pay down may differ from one another too. Meaning one person will happily sell their home, their car and most of their possessions to eliminate all or most of their debt. Another person would rather not do those things because it would make them incredibly unhappy.

You have to figure out what an aggressive pay-down looks like to you, and only you. It’s not that you can’t be open to feedback and suggestions, you can. Just don’t get caught in the trap where you constantly compare yourself either. Use other people’s success to motivate you on the those days where you want to quit as a reminder that people can eliminate debt and reach financial freedom. But remember, it’s not a competition as to who gets there the fastest. All that matters is that you get there.

Step #2: Set Goals that Matter to You

Now that you’ve stopped comparing yourself to others, you can turn your attention (and energy) onto what you want to achieve and the life you want to create for yourself and your family. When you have debt to eliminate, it is often your top priority goal, which is fine. I encourage you, however, to set goals beyond debt elimination. Because in many instances that alone is not enough. What else do you want your money to do for you? Be specific.

And when you find yourself jonesing to shop after a bad day or stumble across something you want but don’t need, ask yourself, “Does this bring me closer or further away from my goal of XYZ?”. If you can stay focused on your goals and what you truly want, then it’s much easier to walk away without feeling deprived because you know that your “no” puts you another stop closer to achieving the life you truly want.

Step #3: Create a Realistic Budget and Track Your Spending

I truly believe budgets give you freedom, rather than take it away, which is how many people commonly view budgets. When I know how much money I have available, then I can make informed choices on how I want to spend it. When I don’t know how much money I have to spend without creating debt, then I am justing spending. And not always on the things that truly matter to me.

There are so many different ways to budget and track your spending these days with all the handy apps and tools that make it easy for you. There is no one right way to budget. There is only the budget you will follow consistently. Find it and use it.

Step #4: Give Yourself Peace of Mind with an Emergency Fund

Now I know this one can be really difficult for those paying off debt. Having a sum of money just sitting there, earning pennies in interest, seems silly. I get it. It’s very tempting to use that money to put a nice dent in your debt. But I suggest you don’t.

First, stop thinking of it as wasted money. In my mind, it’s actually quite priceless. An emergency fund is exactly that — it saves you from creating or going further into debt when emergencies happen. And they do happen. Regularly. If your emergency fund isn’t being tapped, then consider yourself fortunate that life is rolling along smoothly.

Some of you may still think it’s worth the risk, not realizing the psychological impact of an emergency fund. You rationalize that you can always use your credit card in a pinch. Here’s what I often see happen. Not having any sort of cushion causes people to have more sleepless nights than their debt does. They feel very vulnerable and exposed. They now not only worry about their debt but also about the “what if’s”.

In most situations, some emergency does arise and they don’t have the funds to cover the cost outright, so it goes on their credit card. Sometimes it undoes months of hard work and it’s incredibly demoralizing to the point where many quit. The fact is, if you have substantial debt, it will take time to eliminate it, potentially years. Having money set aside to help cover emergencies when they happen will help you stay on track with your debt repayment plan.

Step #5: Forgive Yourself for Your Money Mistakes

Every single person has money skeletons in their closets. Money is emotional and sometimes we make bad choices when we let our emotions guide our decisions. While we need to learn from our mistakes, we don’t need to beat ourselves up over them either. Constantly replaying mistakes while we call ourselves “dumb”, “stupid” or “bad” for making them does not help us gain control over our money. Instead we feel even less confident in our choices because we start to second-guess ourselves constantly. We become so paranoid about making a mistake that we refuse to make any decision. Debt does not make you a bad person. Forgive yourself and move forward.

Celebrate — You’re Back in Control

Having money balance helps put you back in the driver’s seat where you are the one making decisions that honor your goals and values versus letting others or your emotions make them for you. You not only feel confident in the choices you are making but also your ability to reach financial freedom.