How To Create a Magical Birthday Party on a Budget 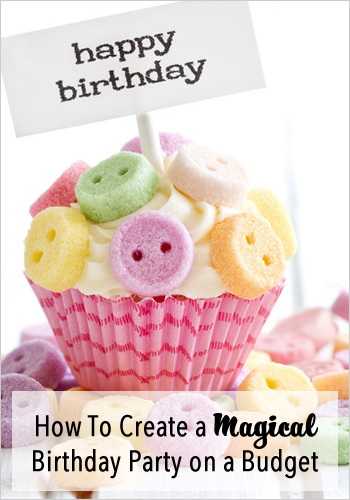 As I mentioned last week, November is special to me as Lauren was born this month. I can still remember the intense love and fierce protectiveness I felt when I held her in my arms for the first time. Those feelings have never wavered. I am blessed to be her Mom, and I’m so excited to watch her grow into an amazing young woman.

With her birthday fast approaching, we are in the midst of planning her birthday party. For the past few years, Lauren has managed her birthday party budget. Now this may seem like a strange birthday tradition to have Lauren plan her own birthday party, but developing a healthy relationship with budgets has been one of the best gifts I could give her.

The Gift of Budgets

Whenever I bring up budgets to clients, there is almost always a wince or grimace. Very few people like budgets. They find them restrictive and cumbersome. Few use them for those reasons, which makes it so much harder to live within their means. It’s a prevalent mindset and one I don’t want Lauren and Taylor to acquire, so I started working with them on budgets when they were small and on something they cared about deeply, like their birthday party.

When I gave Lauren the budget for her birthday, she was thrilled. She thought she hit the jackpot! We sat down to discuss what she wanted to do at her birthday party. Her big wish was to go out for dinner with her friends, then host a big sleepover at our home. Sounds pretty affordable, right? Not quite so fast. She wanted a limo to pick up her friends and take everyone to restaurant and our home. There went the affordable part.

So we wrote that down on her wish list and started adding other things she wanted. The list kept growing and growing from the things Lauren wanted to the things I reminded her she needed, like napkins and drinks. By the end of the conversation, it was a long list, but Lauren wasn’t worried: she had a HUGE budget, or so she thought.

Armed with her list, Lauren started pricing out her dream birthday party. It wasn’t long before her big smile began to fade as she realized how much things cost and how quickly even what appeared to be a large sum of money could disappear.

In the end, she was significantly over budget and I was secretly pleased. Lauren was sad that her dream birthday party appeared out of reach, but I told her we weren’t done yet. I shared with her my philosophy around budgets. They don’t restrict us as so many people believe, but give us freedom. Budgets give us the freedom to use our money on what matters most.

What is Your Must-Have Item?

So I asked Lauren out of everything on her list, what mattered most? What would make her birthday amazing and unforgettable? Her answer: the limo ride. She had her heart set on that, which of course, was the most expensive piece to her dream birthday party. But I didn’t argue or ask her to compromise … yet. The limo ride was her must-have item, and she would have to build her budget around the cost of it, which meant she would need to prioritize and make some compromises.

Prioritize and Compromise around Must-Have Item

We then went through her old list and she immediately removed items that meant very little to her. She then ranked the remaining items from highest to lowest priority. It wasn’t easy as she certainly wanted everything, but she knew in order to get what she wanted the most that she had to be ruthless with the remaining items. Did she really need the fancy napkins or would a plain, colored napkin suffice? A cake from her favorite bakery or one from the grocery store or even a homemade cake? She once again added up the cost of her dream birthday party, but she was still over budget.

Comparison Shop to Get The Best Deal

I was proud of how much Lauren had trimmed from her budget, and it would have been easy to give her a little extra funding, but that’s also a bad habit so many of us form. Budgets lose their power and effectiveness because we always give ourselves permission to go over budget. And that money has to come from somewhere. So even though we could have technically paid for the excess without an issue, I held firm because I knew there was one avenue Lauren hadn’t explored yet — comparison shopping.

So Lauren went back online and start doing some comparison shopping, looking for deals and ways to cut costs without having to eliminate something she wanted. She found some good bargains when she stumbled upon a great deal that only required a small compromise to her original must-have item, but would significantly impact her budget. She was able to find a limo company that would pick up all of her friends at their individual homes, drive them to the restaurant and then to our home for the sleepover for …. drum roll, please ….. the low cost of $45, which included the tip.

That’s right. $45. It meant going at an off-peak time, which was fine by her and her friends. Young kids don’t mind eating an early bird dinner. 🙂 She was so thrilled because she was not only able to get her must-have item, which was really busting her budget, but was now able to add some items back in.

A Magical Birthday Party on Budget

Lauren had a magical, unforgettable birthday party, full of great friends, food, presents and karaoke in a limo. 🙂 But the best gift, in my opinion, was learning to embrace budgets and to see that she could have a dream birthday party on a budget. To figure out what matters most, then build her budget around it. To make compromises and look for bargains to help stretch her budget. Lessons that will serve her long after the birthday candles are blown out and the presents are unwrapped.

Lauren has continued to plan fabulous birthday parities every year while making her budget. Some day I imagine Lauren schooling her friends, who complain about budgets and how awful they are, on how wonderful they can truly be with a mindset shift and the knowledge they actually give you freedom.