Fear or Joy: How Do You View Money? 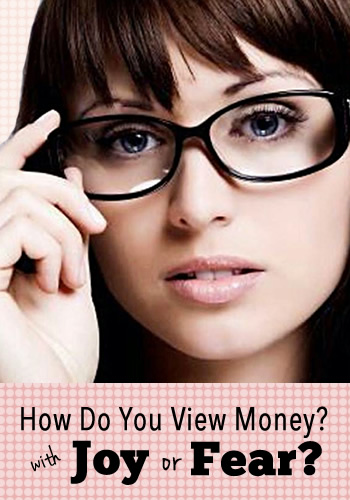 When my father told me money was emotional, I was initially surprised because I had never really thought about it in that manner until then. But it made sense. My emotions definitely influenced how I used and handled money, even though I was only thirteen years old. The memories of lean times and unspoken money fears still lingered years later. My father told me money was a gift and should be used joyfully, but I didn’t always feel much joy when I spent money. Instead I spent a bit fearfully, not allowing myself to buy things I wanted (and could afford) because I worried about not have enough money in the future.

Fear can be an appropriate teacher. We tell our kids to not touch a hot stove because they could burn themselves badly. Young children tend to be naturally-trusting, so we warn them about stranger danger. Fear certainly serves a purpose, but is it a good teacher when it comes to money? Let’s take a closer look.

The biggest—and most obvious—danger of using fear to teach kids good money habits is that it scares them. Of course, that was your intent, but young kids are very literal. You want your kids to make good decisions with how they use their money, but you don’t want them to actually become fearful of money. This puts fear in control of their money, rather than themselves. Some will second-guess their money decisions to the point where they cannot make a choice out of the fear of making a mistake that will haunt them forever. I have meet people who have diligently saved to buy a home or to go on a nice vacation or even retire, but when it comes time to buy their dream home, book their vacation or quit their job, they cannot do it. They are too scared.

The better choice is to help your kids develop a healthy amount of respect for money, rather than fear it. They do need to understand there are consequences to poor money decisions, which is why you’re teaching them about money now. You want to help them avoid making those mistakes and give them the skills and knowledge to overcome any money mistakes that they do make. Because the reality is that they will make some.

As I have shared previously, this is why it is so important to allow kids to make money mistakes now, when the stakes are generally quite low. My father let me make mistakes, just as I let Lauren and Taylor do the same. And it’s not easy. It’s very hard to watch your children decide to use their money on something you know they will regret. But I would much rather wipe away tears when it’s a $50 mistake today, than when it’s a $5000 future mistake.

Thankfully, kids are resilient and fast learners. The girls know from firsthand experience the high cost of money mistakes, which helps them slow down and really weigh their choices. And best of all, now their final decisions are not driven by fear, as mine once were, but by knowing what makes their hearts the happiest and honoring their goals.

There are plenty of scary statistics that highlight our precarious financial situation. We cannot deny they exist, but we also don’t need to succumb to the negativity or fear-mongering and instill fear-based money beliefs in our children. I am well aware of what is at stake, but it’s been my experience that fear more often paralyzes people than motivates. This, of course, is not universal, but when it comes to my girls I don’t want fear to be their baseline as to how they make decisions. A life dictated by fear is not the life I want for Lauren and Taylor.

The catch-22 is that often times fear is what motivates people to change their financial behavior and to start talking to their kids about money. They don’t want their kids to repeat their mistakes or to wind-up behind their peers because they are not money savvy. This is generally good news because we want people to take control of their finances and to break the money taboo cycle. The bad news is because they are so fearful, their lessons tend to be fear-based, and it is the overriding emotion their children pick up. Kids see money as scary and a bad decision could ruin their lives. Even if fear influenced your decision to make positive changes, you need to recognize this and be extra mindful that you don’t make it the centerpiece of what you teach and believe ongoing.

My father helped me find the joy in money and understand the consequences of my choices, good and bad. I found the joy in making good decisions that honored my goals and values. I also learned the pain of bad decisions and also the ability to overcome and thrive afterwards. This empowered me to take control of my finances and make financially confident decisions. Now it’s my turn to pass on my father’s message of joyful spending with my daughters and you. Money is a gift. Treat it with respect and use it on what matters most and fear will never enter into the equation.