3 Steps to Help Kids Learn To Think for Themselves 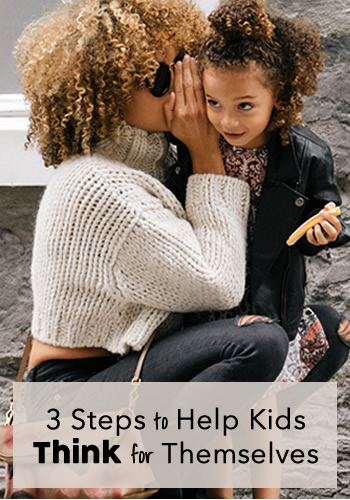 As parents we have lots of responsibilities. Sometimes we innately know them and sometimes we don’t. As I have shared countless times before, I believe financial literacy is one of the greatest gifts we can give our children. And today, it is a gift because most kids leave home with non-existent money life skills.

Those who have financial confidence and have been taught how to make good decisions with their money are leaps and bounds ahead of their peers. Some day, when we break the money taboo cycle in our homes, I sincerely hope financial literacy is no longer a rare gift, but something every parent automatically teaches their children with confidence.

My father taught me a lot about money, and I hear his voice inside my head whenever I find myself struggling with a decision. I also don’t blindly follow every piece of advice he taught me either. And that would make him proud, not mad. He raised me think for myself, not to parrot or mimic him, just because he was my father.

Our Greatest Responsibility as Parents

I believe one of my greatest responsibilities as a parent is to help my daughters learn how to think for themselves. I don’t want them to follow the herd because everyone else is. Instead, I want them to figure out what they want and to be able to make confident choices, whether their decision involves money or not or is even the same decision I would make. Because so much of our lives involve money in some capacity, being financially literate will make a huge difference in their overall well-being, but so does being able to think critically and problem-solve for themselves. They go hand-in-hand and are important life skills kids need to learn.

I love Lauren and Taylor fiercely and certainly want to protect from them from harm. My greatest wish is that they have a care-free childhood full of joy, love and laughter and free from pain and hurt. I imagine you want the same for your kids too. Sometimes our desire to protect our kids leads us to control many aspects of their lives, including what to think and do. And left to their own devices, they don’t know how to analyze a situation and make a smart decision. They look to someone else to tell them what to do.

It’s normal and right to have certain rules and expectations within your home and for very young children to look to you for guidance. However, there is a fine line between dictating to kids versus teaching kids to think for themselves. You want your kids to learn how to think for themselves, otherwise they will follow the herd to places you (and they) really don’t want to go.

1. Talk to Your Kids about Your Values and Decisions You Make

Did you know that families are spending less than 8 hours per week together? During the week, some families spend an average of 30 minutes together. I get it; everyone is busy. This is why it is critical that your time together is productive (and look for ways to increase time together too). My father was a busy man but he found the time and so do I. Because helping Lauren and Taylor learn how to think for themselves, is a priority to me.

You don’t need to make these sit-down, formal conversations. They actually work much better if they are not. Just look for those teachable moments, like when you’re shopping or your kids are in an inquisitive mood and want to talk. Walk them through your decisions and explain your choices. Show kids that your decisions are not arbitrary but have meaning, often tied back to your values.

2. Ask Your Kids for Their Opinion

Explaining the “why” behind a decision is a critical step and one that too many parents miss. Fortunately, more and more parents are getting better at saying more than just “no”, which is a great start. However, it still only part of the equation. The “why” explains your rationale, which is important for kids to see and understand, but now you need to give them a chance to voice their opinion on the matter. This doesn’t affect your decision but provides an opportunity for you to gain insight in how your kids think things through or don’t.

Let Them Speak their Mind Without Judgment

This isn’t a test for them to pass, but a safe conversation where they can speak their mind without fear. Ask them what decision they would make and most importantly — “why”. Don’t let them get by with a “just because” or an “I don’t know” but gently persist in getting a real answer out of them. This is your chance to turn the tables on them and to keep asking “why”. They will eventually tell you, especially when they see that you are genuinely interested and open to discussion. Judgment, on your part, will stop the conversation, so be mindful of your words, facial expressions and body language.

Look for Faulty Logic and Correct

You should allow your children to express their opinions without making them feel bad while also exposing any faulty thinking you find. The kind of thinking that gets them into trouble, such as, “everyone has debt, so it must be okay” or “keeping up is important”. Those type of myths are incredibly prevalent and many people fall for them hook, line and sinker. This is your chance to confess some of your money mistakes due to your own past faulty thinking and help them break the cycle.

Success Tip: With older kids, you can have an open and direct conversation with them. Again, don’t say that their thinking is faulty, because you don’t want them to get defensive and stop listening to you. Instead, start the conversation with “I used to feel the same way” and explain the outcome of that thinking as food for thought. With younger kids, look for specific opportunities to demonstrate a different way to think and explain your decisions to help rewire their thinking.

This is hard. So hard. Parents hurt when their kids hurt and it is painful to watch your kids make a mistake that you could have prevented. But part of learning to think for yourself is being able to problem-solve, to see the big picture and to identify potential risks. To be able to plan for them and to be nimble enough to side-step them or other unforeseen problems. Most importantly, to also know that mistakes will happen, regardless of good plans and intentions, and you have the ability to recover from your mistakes too. Mistakes only destroy dreams when you allow them to do so.

The Mama or Papa bear inside of you will insist that you protect your kids and not allow them to go through the pain of a mistake. But mistakes are not only a natural part of life, they also can be the best teachers. The girls know how Chris and I think, because they are a part of many big decisions we make as a family. When confronted with a choice, they likely know what our decision would be. Sometimes, they make the same choice we would, while other times they don’t. When we know their choice is one they will regret later, it is hard to do or say nothing, but unless their choice puts them in danger, we let them ride it out, knowing that we will be there to help walk them through the aftermath. To help them fine-tune their thinking, so they next time, they won’t make the same mistake. This is how they learn to think for themselves.

Independent Children Are Our Future Leaders

Lauren and Taylor will turn 12 and 10 by year-end, and as much as it shocks me to have two daughters with double-digit ages, I am also excited to see the young women they will become. It’s my hope that they will hear my voice in their head when they struggle with decisions, just as I hear my father’s, and I do know with absolute confidence that they will know how to think for themselves. They will have the skills and ability to make decisions that forge their path to whomever they want to be, whether it’s a CEO, the person who cures cancer, a teacher or a Mom (which is the most rewarding and hardest job of them all). It doesn’t mean they won’t ever make a mistake but when they do, they won’t fall to pieces and have the confidence to figure out a solution on their own.

Are your kids independent thinkers or do they tend to follow others? How are you helping them develop critical thinking skills?